Marsilea minuta is a popular aquatic plant among the pet fish lovers which is also known as Small Water Clover, Dwarf Water Clover and Gelid Waterklawer etc. It is distributed in the entire African continent, from Algeria to tropical West, Equatorial and East Africa, southwards to Angola, Zambia, Mozambique, Zimbabwe, South Africa, and Swaziland. It is also found widely through tropical Asia, Comoros, Madagascar and the Mascarenes. It occurs in shallow pools, bank of rivers, canals, pans, ditches and lowland rice fields. It is most abundant in flooded places where it forms large and dense colonies. It is rooted plant with erect petioles and emergent leaflets. It prefers relatively calm or still water and in deeper water, the leaflets float on the water surface.

Marsilea minuta is one of the most popular foreground plants for aquariums. It is a perennial herb with slender long dichotomously creeping and branching rhizomes with erect leaves along their length. The roots are formed at each node of the rhizome which anchors it to the soil. The rhizome is green to light brown in color with 0.4-0.8 mm thick and it is densely covered with tan hairs at apices but glabrate proximally. The leaf consists of four clover-like leaflets at the apex of a slender, flexible petiole. The young parts of the leaves are covered with numerous multi-cellular hairs. The petiole can grow to a length of 10-15 cm. At the base of the petioles the bean shaped sporocarps are formed which contain both megasporangia and microsporangia. The sporocarps are 3-4 mm long, 2.4-3.1 mm wide and 1.3-1.7 mm thick with two basal teeth, of which, the upper teeth is sharply pointed and lower one is shorter and obtuse. This plant spreads by emergent runners. Along each runner one to five tiny bumps form. Under optimal conditions, this plant forms a thick, dark to lime-green carpet with its numerous runners. It can easily propagate by runners in an aquarium conditions with proper care. In aquarium bottom, it provides good cover for fry fishes and on the surface it provides restraints from jumping.

Marsilea minuta was first described by Presl in 1825. It belongs to the family Marsileaceae under order Salviniales of class Polypodiopsida. This species has several synonyms such as Marsilea crenulata Desv.; Marsilea diffusa Lepr.; Marsilea rotundata Wild.; Marsilea tenax Peter etc. This plant is classified as ‘Least Concern’ in the IUCN Red List of Threatened Species (2011).

Marsilea minuta is a popular foreground plant among the aquarium enthusiasts due to its relatively undemanding nature. It is amphibious and grows either partially or fully submersed condition. It is very easy to care for and it grows well in high intensity lighting. Lighting should be at least 3 watts per gallon with full spectrum (5000-7000K) bulbs. In less light it grows upward with the clover like plantlets that float on the water`s surface. The tank should have a nutrient rich fine gravel or sand type soil. Substrate should be 1-2 inches depth which provide a good base for plant roots during planting. It prefers good water quality with pH of 6.0-7.5, hardness of 3-8 dGH and the temperature should be between 64-840F. Under the proper conditions, this fern forms a thick carpet with its numerous runners. In aquarium bottom, it provides good cover for fry fishes and on the surface it provides restraints from jumping. 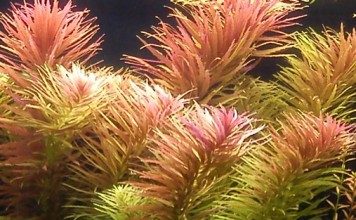 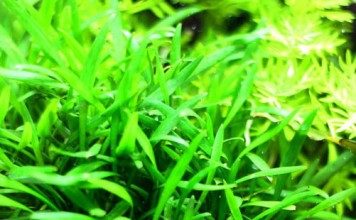 Marsilea Minuta is a great choice for beginners and experienced hobbyists due to clover-like leaflets which add some sparkle to an aquarium with incredibly vibrant shade of green, especially under a strong light. It is seldom available in local pet shops. If you want to purchase it online from home, look below to purchase your Marsilea Minuta today!

The Marsilea minuta can easily propagate in aquarium with proper care. It mainly propagates by runners. Fertilizers should be added to the tank water to get the best growth results along with a good CO2 system and lighting. For proper propagation, cut the runner with at least one plantlet into section from mature, healthy plants using sharp scissors. The plantlets should be slowly pushed into the substrate. Plantlets should be placed half an inch to 1 inch apart. After few days the new cutting produce roots and anchors it to the substrate itself and begins growing. It spreads rapidly and covers the bottom of the aquarium. It should not be allowed the plants to dry out before they are placed in the aquarium. They occasionally can do sexual reproduction through microspore and megaspore production. It can also produce adventitious shoots and form new plants.

In many countries, the rural people eat the fronds as vegetable. Many people drink the juice of fresh shoots as a remedy for cough, respiratory trouble especially for their babies. Juice or paste of the whole plant is also applied externally on the head of patients suffering from sleeping disorder and hypertension. In southern India it is used as medicine as an ingredient in a commercial drug for treating epilepsy. Fruits and vegetables are a rich source of bioactive phyto-chemicals. Regular and high intake of vegetables and fruits it prevents several chronic diseases like cancer, cardiovascular diseases, diabetes, etc.

In the market for some Marsilea Minuta? well we are now selling it right here on Aquatic Mag. You can can also get a 10% off discount just by sharing this post.