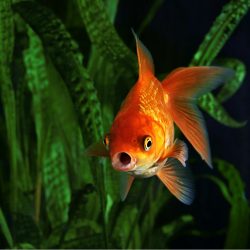 When planning your fish tank, it’s crucial to understand the types of water than different species need. That’s why people ofter ask the question “are goldfish freshwater fish?” – they don’t want to put their goldfish into the wrong type of water.

Putting a fish that needs fresh water, like a goldfish, into a saltwater tank would quite quickly be fatal.

Goldfish are freshwater fish. This means their bodies are adapted to living in fresh water environments, such as lakes and rivers, which have very low salt concentrations.

Can goldfish live in salt water?

Due to their physiology, goldfish cannot survive for long periods of time in salt water.

If you put a goldfish in salt water, osmosis would cause the water from within the fish’s cells to move out of the fish’s body and into the surrounding ocean water.

Though goldfish can survive in salt water for short periods, the dehydration caused by osmosis will quickly kill them if they are not removed from the saltwater and returned to a freshwater tank.

Even though goldfish are freshwater fish, some people believe that it is a good idea to add salt to a goldfish tank in order to prevent or treat diseases.

As explained above, salt can be extremely dangerous for goldfish, so whether or not this is a good idea is debatable. If your aim is to prevent your goldfish getting sick then adding salt may do more harm than good.

If you are going to add salt to your goldfish tank, the most important thing is not to add too much.

How much aquarium salt is ok for goldfish?

If your goldfish is healthy and the aim of adding salt is to prevent disease, then our preference would be to add half a teaspoon of salt or less to your goldfish tank. Generally speaking, our advice is not to add any.

If your goldfish has a mild infection that you are trying to treat, then you can add up to a tablespoon per three gallons of water. Monitor the goldfish over the course of a few days and only add more salt if the infection is not getting better.

If there is no sign of improvement then the next step would be to increase the concentration of salt to a tablespoon for every two gallons of water. Again, monitor your goldfish closely over a few days for signs of trouble or improvement.

If the infection still does not improve then you may want to consider a salt dip.

If your goldfish has a serious parasitic or bacterial infection then you could try a salt dip or salt bath.

A salt dip is where you put your goldfish in saltwater for a short period of time.

The exact amounts will depend on what your goldfish is suffering from and how bad the infection is, but for example, a salt dip may consist of 30 minutes in a container with a concentration of 1 tablespoon of salt per gallon of water.