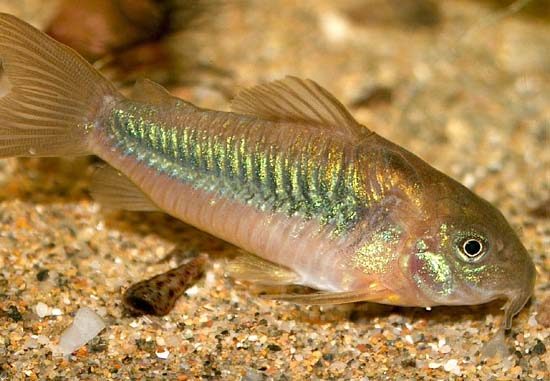 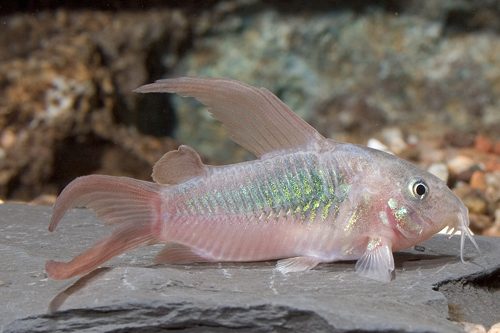 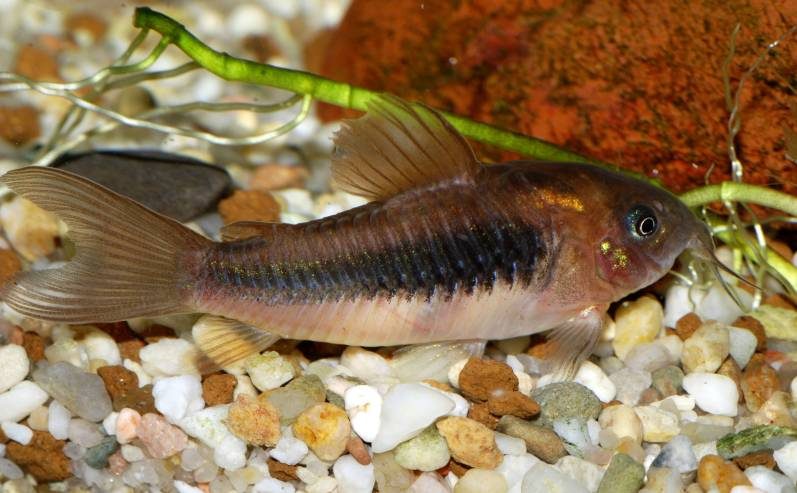 It was originally described by Theodore Gill in 1858. It belongs to the family Callichthyidae under order Siluriformes of class Actinopterygii. This fish bears two rows of overlapping bony plates which runs down each side of the body and large plate that covers head. The genus name Corydoras is derived from the Greek word kory means helmet and doras means skin. Upper side of this fish body is often a greenish in color which gives the popular common name ‘Green corydoras’.

The Bronze Catfish is the most popular of all the aquarium catfish. It is well known among aquarium hobbyists due to their brilliant body shape and hardiness. They are well suited to tropical freshwater community aquariums and they are not at all aggressive.  It requires at least 10 gallons aquarium but larger is recommended.  They do not do well in fish tanks with high nitrate and ammonia levels which lead to the infection of the barbells. The barbels may also be affected by constant contact with a sharp substrate.

The tank should be decorated with driftwood, dense vegetation and few floating plants with a dark substrate and an open space for swimming that provide relief from the light. The tank should have smooth sand or gravel substrates which do not damage barbells. Like other Corys they prefer the company of their own kind and should be kept in schools of a half dozen or more. Ideal tank mates include Guppies, Mollies, Platies, Swordtails, TetrasBarbs, Danios,Discus, Angelfish, Rasboras, Gouramis, Rainbowfish, Plecos. The water should be well aerated and an efficient filter is also needed. Proper care should be taken and 25-50% of the tank water should be replaced at least once a month. If the tank is densely stocked 20-25% water should be replaced weekly or every other week.

Bronze coredoras is omnivorous fish which mainly feeds on worms, benthic crustaceans, insects and plant matter. They also eat any dead, dying or even injured fish. In captive condition, they accept most food which sinks to the bottom of the tank. It should be supplemented sinking algae pellets with flake food or other sinking foods like catfish pellets.

Corydoras aeneus can breed in captive condition. It spawns during the rainy season. Prior to breeding, they should be conditioned with high quality flake foods, as well as fresh or frozen bloodworms and brine shrimp. The water of the tank should be slightly acidic (pH:5.8-7.0) and temperature should be ranged between 72 and 790 F. Female lays up to 200 eggs on plants or side of the tank. After releasing eggs the adult should be removed or eggs should be moved to another tank where the fry can be reared. The eggs gradually grow darker in color and just prior to hatching they turn dark brown. Eggs hatch within four to five days but it may vary on the basis of environmental factors. After hatching, the fry are free swimming 4-5 days later.  The fry should be fed with Infusoria or very fine powdered or freshly hatched brine shrimp. Frequent water changes should be done during grows out period. Adult coloration is reached in around nine weeks.

It is easy to make the differences between males and females.  The male is smaller and slimmer while female grows larger and much wider which can easily observe from above. Sexually mature female has noticeably rounder and broader body than male especially during breeding season.

Bronze Cory is the most well-known fish among the aquarium hobbyist and can be found on sale in most pet stores and online shops. The Bronze Cory is also available in Albino, Green and Longfin varieties. You can buy it from online aquarium fish shop from your home by ordering them. To buy this corys, look below online vendor that I would recommend from.