The dwarf corydoras is a tropical freshwater fish which is also known as Pygmy corydoras, dwarf catfish, Tail spot pygmy catfish, Mini spotlight corydoras or micro catfish. It originates in inland waters in South America and it is found in the Amazon River and Paraguay River basins in Argentina, Bolivia and Brazil. It inhabits in small tributaries, creeks, pools and areas of flooded forest. It is also found in large numbers sheltering among marginal vegetation or tree roots. 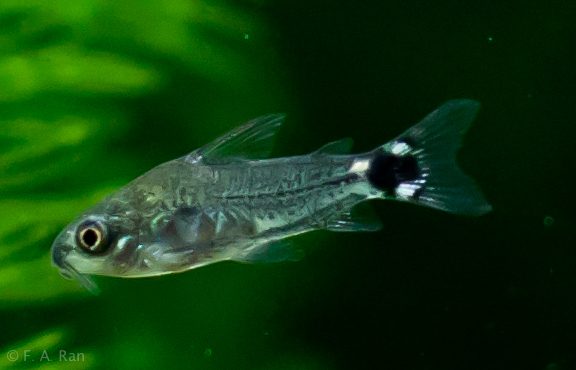 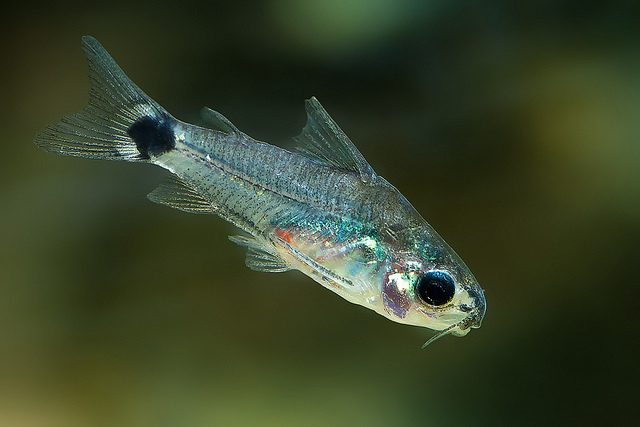 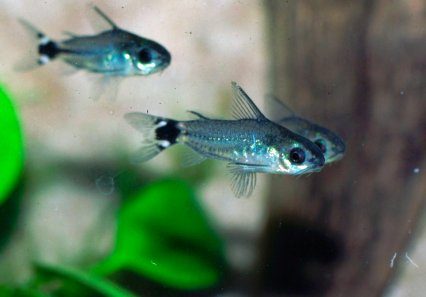 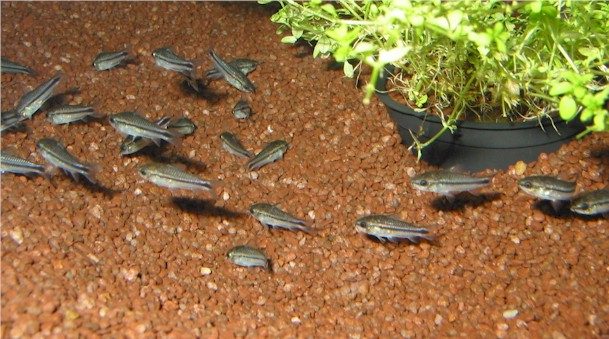 Corydoras hastatus was described by German ichthyologist Carl H. Eigenmann and his wife Rosa Smith Eigenmann in 1888. It belongs to the family Callichthyidae under order Siluriformes of Class Actinopterygii.  The genus name ‘Corydoras’ is derived from the Greek ‘kory’ meaning helmet and ‘doras’ meaning skin. The specific epithet ‘hastatus’ means with a spear in reference to the spearhead-like spot on the base of the caudal fin.

It is a small sized fish which can be kept in a relatively small aquarium. A 10 gallons tank with good filtration and moderate current are recommended to keep dwarf corydoras. The aquarium should have lot of plants, space for free swimming, dimmed light, floating plants, hiding places among roots or branches. The aquarium should be cleaned and well-aerated. The tank water should be slightly alkaline (pH about 7.6) with a temperature range of 68-82°F. Corydoras hastatus prefers sand or smooth gravel on the bottom of the tank.

It is omnivorous fish which mainly feeds on worms, benthic crustaceans, insects and plant matter. In captive condition it accepts most foods including freeze-dried flake, sinking algae wafers, shrimp pellets and frozen foods. They also eat any dead, dying or even injured fish that sit on the substrate. These fish are most active at night, so feed should be offered before lights out is typically enough. Feed should be applied once or twice times a day.

It is oviparous fish. At least a 5-gallons tank is recommended for spawning. The tank should have fine substrate such as sand or gravel, fine and soft leaved plants, and sponge filter with peat. The tank should also have good water with pH of 6.0–8.0 pH, a water hardness of 5–19 dGH and a temperature range of 68–820 F. Before spawning, fish should be fed with large amounts of live foods such as Tubifex and whiteworms. During spawning period, a female lays 30-60 eggs in dense vegetation and spawning occurs on three to four consecutive days. The adults do not guard the eggs.

After spawning, parents should be removed to prevent eating the eggs. The eggs hatch in three to nine days. The fry are about 6 mm long at hatching and they are mostly translucent but sometimes with spots. In two months, the fry grow about 18 mm in length. The fry mature in six to eight months. The fry starts swimming and feeding 2 days later. They should be fed with newly hatched brine shrimp or microworms.

It is easily make differences between male and female when it is viewed from above. Females are noticeably rounder and broader bodied than males especially when full of eggs.

Dwarf corydoras is the perfect choice for aquarium hobbyist due to their hardiness. They are extremely peaceful fish and it has commercial importance in the aquarium bio-system. The Dwarfs cory’s are not only cute but really interesting fish to keep in a smaller tank together with other small fish especially characins. To buy your Corydoras online today, check out below for recommendations where to buy your Dwarf Corydoras today!