The green spotted puffer (Tetraodon nigroviridis) is one of the most popular aquarium fish. It is also referred to as Leopard Puffer, Green Pufferfish, Green Spotted Puffer, Burmese Pufferfish, Spotted Green Pufferfish etc. It is distributed in Southeast Asian countries such as Indonesia, Indochina, Malaysia and the Philippines. It occurs in brackish water in coastal areas, freshwater rivers, streams, lakes and flooded areas even occasionally in the sea. Adults occur usually in slow-moving rivers, estuaries and the upper reaches of backwaters. The juvenile prefers salinity level of 1.005-08 while adult for 1.018-22. The ideal water temperature and pH for this species ranges from 78-82 °F and 7.5 to 8.2 respectively.

Tetraodon nigroviridis was discovered by Marion de Procé in 1822. It is a little fish which is popular with tropical fish fanciers. It belongs to the family Tetraodontidae under order Tetraodontiformes of class Actinopterygii. This fish has the ability to fill their body with water or with air and puff themselves up when they feel in danger and which gives the popular name ‘puffer fish’. When they puff themselves, their spines protrude outward.

The Green Spotted Puffer is a highly unique and interesting fish which requires at least 30 gallons aquarium but larger is recommended. The tank should have plants and rockwork for hiding as well as open areas for swimming. The water temperature should be between 74 and 820 F with pH 7.5 -8.2. It is messy eaters which produce lots of waste in the tank and it needs strong filtration to make tank clean. Juveniles should be kept in low range of specific gravity that ranges from 1.004-1.008 while adults require 1.018-1.022. They have no scales and gill covers and this species is prone to diseases, nitrite, nitrate and ammonia. So you need to perform water changes of about 50% weekly to keep the water clean and this fish should be kept in recycled aquarium with low nitrites. Spotted puffers are particularly aggressive toward their own kind and similar species during the adult stage.  Due to their aggressive nature as adults, Spotted Puffers should be kept alone or in pairs. If it is kept with other fish, choose only hardy, robust and active species such as scats, archerfish, Arius catfish, monos, mollies, scats, bumblebee gobies, and other green spotted puffers. Avoid mixing them with long finned species such as Bettas and angelfish.

It is carnivorous fish which eats variety of foods such as mollusks, crustaceans and other invertebrates as well as vascular plants and detritus. Occasionally it feeds on fish scales and fins. In captive condition, it readily accept freeze-dried plankton, frozen brine, krill or other shrimp, live snails, mussels, squid, oysters, lobster and crayfish etc. The young puffer fish should be fed with frozen or freeze-dried krill or plankton.

Green spotted puffers are difficult to breed. The fish spawns only in brackish water and the breeding tank should have some flat rock surfaces that act as potential spawning sites. The female lays pale clear eggs directly onto the substrate or a flat rock. The male protects the brood and uses his body to cover the eggs. The eggs hatch in about a week and the male transfers the tadpole like fry to shallow pits and continue to guard them. The fry should be fed with newly hatched brine shrimp or microworms.

It is impossible to sex by external characteristics. Usually the only way is by dissection, or if they happen to lay eggs.

Green spotted puffer is very popular fish in brackish water fish tank due to their brilliant coloration and hardiness. Unfortunately many pet stores sell them as freshwater fish and many people keep them as a freshwater fish. In freshwater, the Green spotted puffers cannot thrive and eventually dies. They are readily available at pet shops and online vendor. To buy your favorite fish, look below online vendor and ask about this fish that I would recommend from. 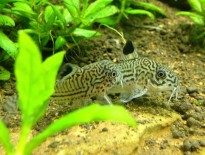 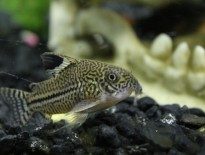