The rainbow shark (Epalzeorhynchos frenatus) is a popular freshwater aquarium fish which belongs to the family Cyprinidae under order Cypriniformes of Class Actinopterygii.  It is also referred to as the ruby shark, red fin shark, red finned shark, rainbow shark minnow, green fringelip labeo, whitefin shark and whitetail shark minnow. It is native to the basins of Mekong, Chao Phraya, Xe Bangfai and Maeklong in Thailand and Indonesia. It is found near any type of solid surface at mid water and bottom depths in streams and rivers. It also moves into seasonally flooded habitats and returns to the rivers during dry season. 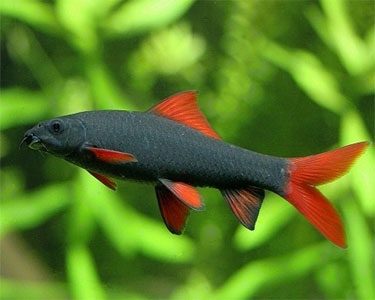 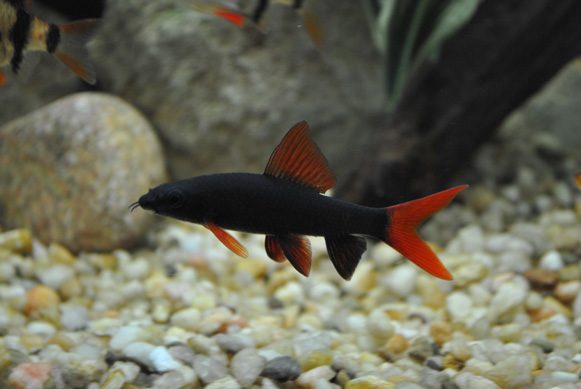 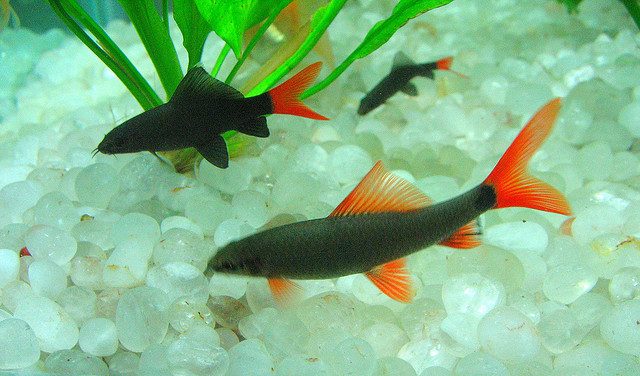 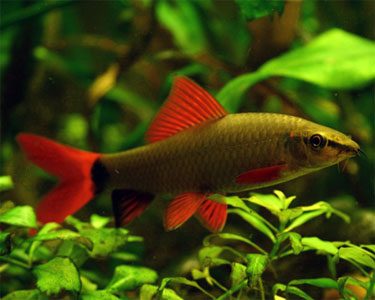 The rainbow shark is originally described in 1934 by H.W. Fowler and it was placed in the genus Labeo under the species name frenatus. In 1998 the species was moved to the present genus Epalzeorhynchos by Yang & Winterbottom. In fact, it is not really shark and actually belongs to the minnow family, Cyprinidae under order Cypriniformes of Class Actinopterygii. It has upright dorsal fin that gives them a shark like appearance.

At least 55 gallons or larger tank is recommended and it is arranged with lots of plants and décor. The tank should have much space with plenty of hiding places such as caves, rocks and plants.  Water pH of the tank should be ranged between 6.5-7.5 while water temperature should be varied between 75°F and 80°F and water hardness should be maintained at 2 to 15 dH. Ideally the rainbow shark should be stocked singly due to their territorial nature to same or similar species. Suitable tank mates include fish like barbs, catfish, large tetras and other fish of similar temperament such as rainbowfish, danios, loaches, plecos, rasboras and gouramis.  This fish can become aggressive with other, smaller fish in your tank that invades its territory. They should be kept with at least 5-6 individuals to reduce any aggression and hyper dominance. They should not be kept with other Rainbow sharks and Red Tail Sharks. A tightly fitting lid is highly recommended because they are terrific jumpers. This shark prefers well aerated clean water with high level of dissolved oxygen and moderate water movement.

The rainbow shark is omnivore and in wild, it mainly feeds on algae, periphyton, phytoplankton and some zooplankton. In captive condition, it primarily consumes algae in the form of tablets, wafers and flacks. It also takes live food such as insect larvae, tubifex worms, periphyton, crustaceans, phytoplankton, zooplankton and aquatic insects. It should also be fed with lettuce, spinach and frozen bloodworms and brine shrimp. Feed should be offered 2-3 times per day.

Breeding occurs occasionally in the aquarium due to their aggression towards their own species.   It reaches sexual maturity during the period from October-November. Both male and female need to be at least 4 inches long to ensure sexual maturity. It is an egg layers and spawning season depends on cooler temperatures and day length.

To breed rainbow shark in captive condition hormone injection is used. During spawning in captive condition, the 75 gallons or larger tank is required. At this time the fish should be fed with protein rich food like brine shrimp or tuna and 25 % water of the tank should be changed using bucket. The female lays eggs on the aquarium gravel and the male fertilize them with a milt spray. The eggs should hatch after several days. After fertilization fry should be transferred to 10 gallons fry tank with dechlorinated water and a mini heater. Fry should be fed with liquid fry food for a week to two weeks and then introduce them to baby brine shrimp. The fingerling should be moved to their own tanks when they reach 1/2 to 1 inch long. Juveniles need a lot of vegetation in their diet to promote proper growth and coloration. Without a proper diet their colors fade and their growth is stunted.

Enter your e-mail in today and periodic updates of new and interesting articles about everything freshwater. 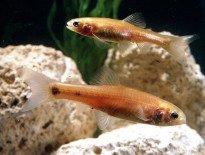 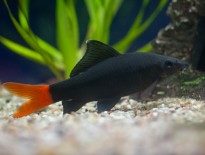