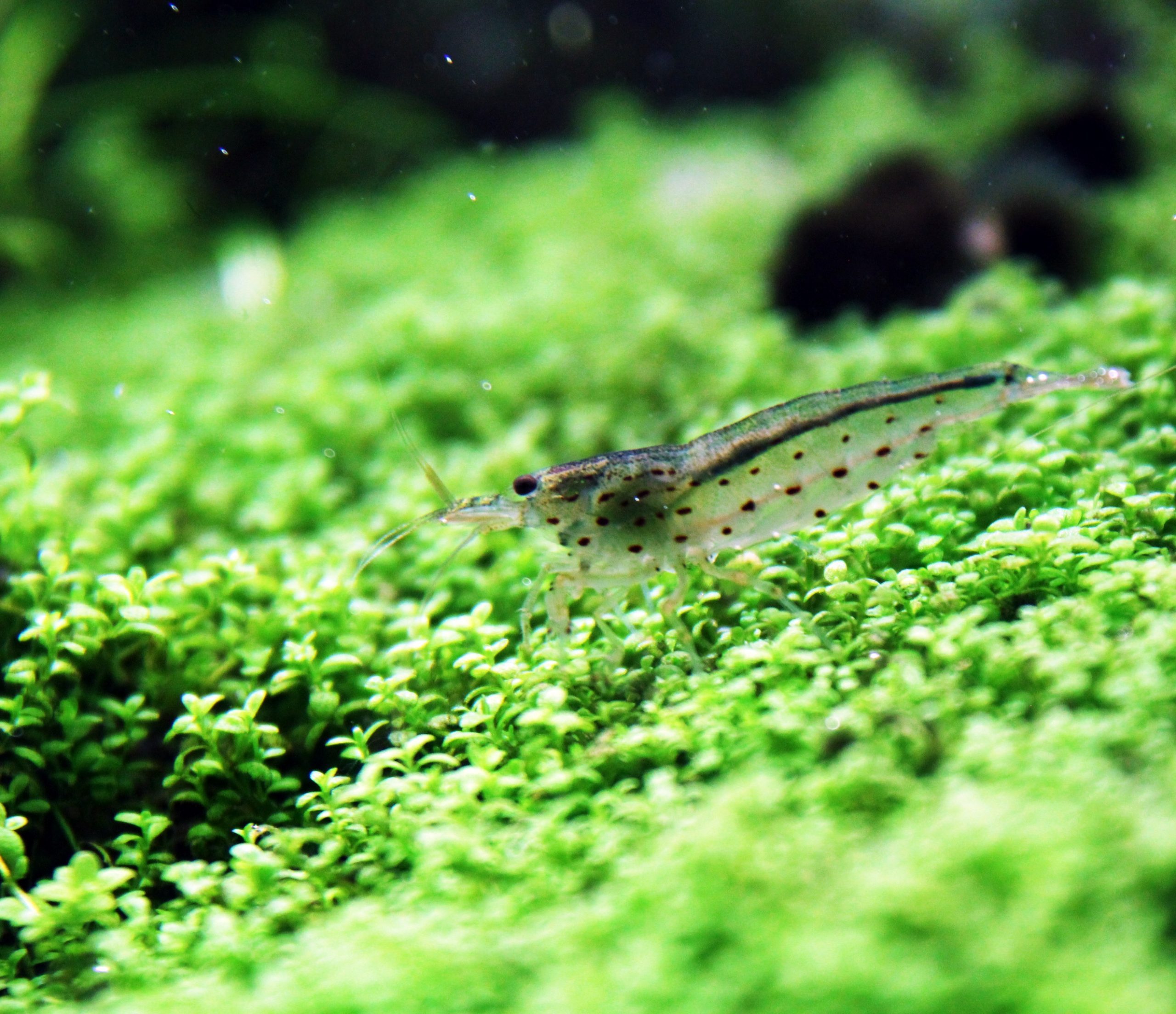 The Amano shrimp which is scientifically known as Caridina Multidentata, originates from parts of Taiwan, Japan and Korea. The Amano shrimp was introduced to the aquatic hobby by Amano Takashi for their cleaning ability back in 1980’s and therefore the shrimp was named after him. It’s the invisible janitor in the aquatic world. They are an important addition for any freshwater tank owing to its reputation of relentlessly cleaning an aquarium. The Amano shrimp are omnivores, feeding endlessly on plants, hardscapes and substrate.

Amano shrimp are one of the largest freshwater shrimp with its size measuring up to a maximum of 2 inches. They are the beast eaters in the shrimp world. The Amano shrimp quests constantly for food, mostly algae, and consequently they are well known to have the most appetite for algae. This includes thread algae, diatoms, hair algae, cladophora, brush black algae, and some forms red algae. In some cases the Amano shrimp also feeds on its exoskeleton (molten Shell) dead fish/inverts and live worms.

Amano shrimp sexes can be differentiates by the dots on their exoskeleton. Along their lower side the males have a row of discrete round dots. Females on the other hand have stretched out dots that appear like broken dotted lines. These dots are reddish/brown in color.  The females are also larger in size than the males. The female Amano shrimp also possess visible saddles which are her embryonic eggs.

Females also have visible saddles, which are her undeveloped eggs. Female Amano shrimp are also larger in size compared to males.

In a well-established aquarium, the Amano shrimp are pretty hardy. They are extremely sensitive to Excess amounts of nitrate and ammonia. Just like any shrimp, any traces of copper in the water will kill them. If you notice that your Amano shrimp is irregularly on the surface of the water, know that the water lacks enough oxygen and also there might be high nitrate concentration.

Breeding Amano shrimp is a bit difficult since raising the fry require brackish water conditions (i.e.: saltwater) Later on the fry will require slow changing to freshwater from brackish water condition as they mature to adulthood. There are some cases however where the Amano shrimp has been reported to breed and raise its larvae all the way up to maturity in hard water though this is very rare.

After mating, the female Amano shrimp glues and carry the developing eggs under her swimettes for about 5 weeks until they hatch. You can either transfer her to a breeding container with similar water conditions or wait until the eggs hatch and here you can use light to bring them to the water surface and then you can siphon them out. After the Amano shrimp larvae separation, you will have 5 -8 days to transfer them to saltwater. It’s however advisable to introduce them immediately into brackish water. Here is some valuable information about Shrimp Reproduction and Growing larvae to adulthood.

Red Cherry shrimp are small and this makes them vulnerable to many predators except other herbivores. As far as it can fit in another animal’s mouth, it automatically becomes its prey. There are proven cases and also from my own experience that shrimp can live together with other fauna. This will depend greatly on the number and aggression of the other predators as well as the size of the aquarium. With these factors in consideration, you can house the predators together with the prey. In this case however shrimp activity will be bare minimum and their survival instincts in check. The probability of the offspring maturing will also be very minimal. Visit hiding spots in an aquarim and know how best to house your red shrimp when introducing it to a hostile environment.

You may find Amano shrimp at your local pet stores and fish stores. They are sometimes imported from the wild. If you are buying online there are good chances of you acquiring a 2nd generation cull from a hobbyist. Hobbyist shrimp are typically even harder than imported/wild Amano shrimp. Amano shrimp prices don’t vary much besides when making a purchase online where the shipping factor greatly influences price for DOA policy.

Here is a list of a few online stores where one can find Amano shrimp for sale: