Cardinal Shrimp is a smaller tropical species compared to the rest of the dwarf shrimp that come from the lake region of the Indonesia Sulawesi region. Cardinal Shrimp lives a little longer (6 months to one year longer) than the average dwarf shrimp. They are also at an extent lighter than many of their contemporaries. Their bright red coloration makes them an attractive addition to the aquarium hobby. Cardinal Shrimp has also maintained its immense popularity owing to its active lifestyle and their relatively ease of care. While they may appear a little bit shy at the earliest, an established group of cardinal shrimp turns out to be more active and will exhibit other interesting and pleasant to watch social behaviors.

Cardinal shrimp was brought to the hobby in late 2007 and is native to the Sulawesi region in Indonesia. There have been efforts abroad to rare these gorgeous but small shrimp.

The Sulawesi region covers two ancient lakes, the five-lake Malili system and the lake Poso. These lakes have also been the origin of other new shrimp species with vibrant colors and patterns that breeders are trying to introduce in the hobby. 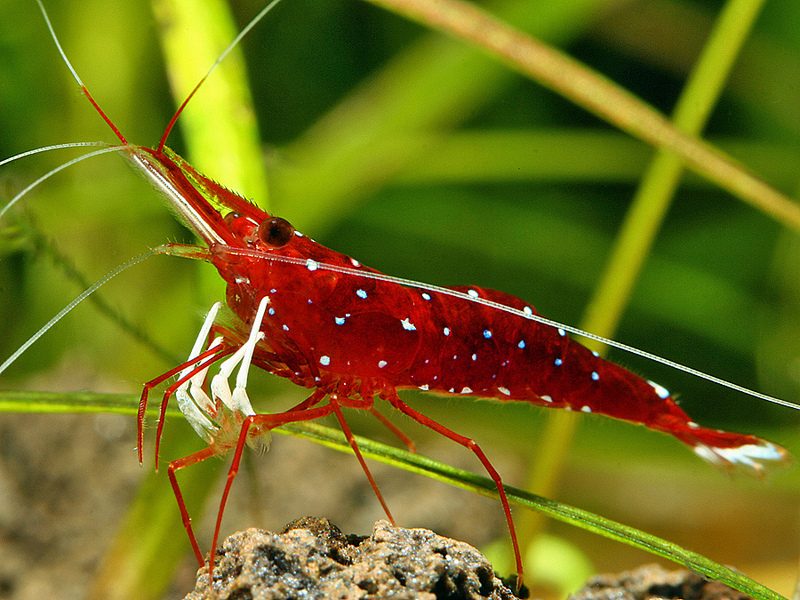 Though there are some exceptions, the care of the Cardinal shrimp is a lot similar to that of other dwarf Shrimps. The shrimp thrives in water temperatures and PH that is slightly higher than that of other Dwarf Shrimp. Generally most of the dwarf shrimp from the Sulawesi region requires water with a high PH but not brackish. Once Cardinal Shrimp gets used to the aquarium conditions, it is easier to take care of them.

As far as diet is concerned the Sulawesi cardinal Shrimp have no unique necessities. They feed on the same food most of the Dwarf Shrimp eat. Cardinal Shrimps are omnivorous with algae being a staple in their diet. When reared in momentous colonies, it is imperative to balance their feeding. Blanched food (boiled to soften) and fish food makes good supplements.

The Sulawesi Shrimp can vary from light red to wine red (close to black) coloration, having blue or white dots all over the body and white millipedes.

Firstly when introduced into an established aquarium, Cardinal Shrimp tends to be a bit shy. This can be attributed to their small size. Later after the shrimp becomes used to the new surroundings, they will start to show the behaviors that are attributed to majority of other Dwarf Shrimp. They continually scavenge plants and substrate for food and most of the time you will see them showing a rather social behavior.

The process of breeding Dwarf Shrimp is quite simple. So long as the water parameters set are favorable to this species, feeding is properly done and there is a male and female in the aquarium, they will probably breed. However, creating a colony of Cardinal shrimp takes longer since their breeding rate is lower than that of other Dwarf Shrimp. Another conspicuous difference between this Shrimp species and other high grade dwarf shrimps is that their broods are slighter.

Cardinal Shrimp are gotten directly from the wild. You might never find them in fish stores.  Breeders are however starting to breed colonies within the U.S to make them more robust with our water. Many of the vendors are important but there are some who do actually set up 1st and 2nd generation aquariums. Here is a list of information sources about the available Cardinal Shrimp vendors